Elie Anatole Pavil - Quay of Tournelle at Sunset in Winter 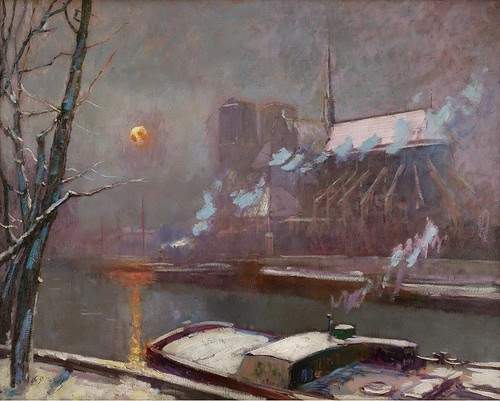 Elie Anatole Pavil - Quay of Tournelle at Sunset in Winter, a photo by Gandalf's Gallery on Flickr.
Pavil (1873 – 1948) was born in Odessa, Russia in 1873. He went to Paris in 1892. He established himself in Montmartre, on the Rue Caulaincourt. For most of the next fifty years he painted the cafes, the beautiful women, the jazz bands and artist ateliers of Paris. His paintings show an intimate knowledge of the inhabitants of the streets and alley’s of Montmartre. Elegant couples dancing, beautiful models posing, working men finishing their day with a drink at the bar, all were captured in Pavil’s carefully balanced compositions, many of which show the distinct the influence of Degas and Renoir.
Email ThisBlogThis!Share to TwitterShare to FacebookShare to Pinterest
Labels: Elie Anatole Pavil 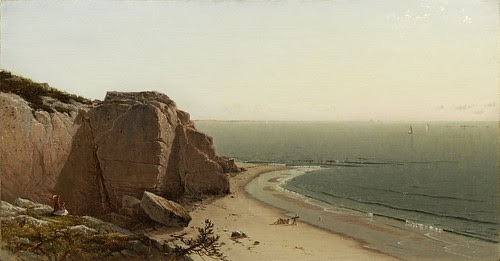 Alfred Thompson Bricher - Quiet Day near Manchester [1873], a photo by Gandalf's Gallery on Flickr.
Alfred Thompson Bricher (1837 - 1908) began his career as a painter of autumnal landscapes, but by the late 1860s he had become a specialist in seascapes. His favourite subjects were the beaches and headlands of the New England coast, and he excelled at depicting such scenes in calm weather and lit by serene, luminous skies. At his best he was capable of equaling the finest work of fellow marine painters John Frederick Kensett, Sanford Robinson Gifford, and Martin Johnson Heade. A Quiet Day near Manchester, 1873, depicts a scene on the Massachusetts coast north of Boston and seems to have been particularly inspired by Kensett, who had died unexpectedly the year before. The mass of meticulously delineated rocks at the left side of the composition and the expansive sweep of sea and sky bring to mind works such as Kensett's late Beach near Beverly. Although Bricher painted many pictures over the course of his long career (he continued working until his death in 1908), the superb A Quiet Day near Manchester is unsurpassed.
[Oil on canvas, 50.8 x 97.16 cm]
Email ThisBlogThis!Share to TwitterShare to FacebookShare to Pinterest
Labels: Alfred Thompson Bricher
Older Posts Home
Subscribe to: Posts (Atom)